In the 1830’s many German Protestants were being forced to join the Prussian Union and were being pressured to practice their religion in Prussian-approved churches run my Prussian-approved pastors. The removal of Lutheran ministers from area churches around Dresden, Germany upset many members of these congregations. This forcible removal of their clergy pushed many to pursue the idea of relocating to America, where they had heard that religion could be practiced freely without government intervention. 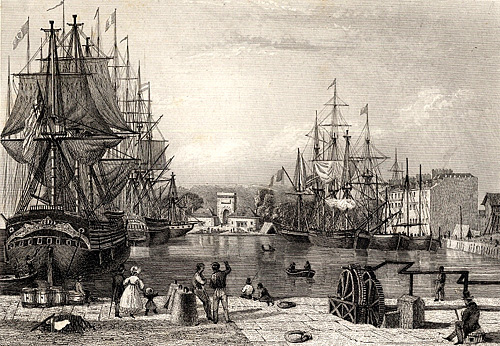 Martin Stephan, the pastor at St. John Lutheran Church in Dresden, Germany, organized what was known as the Saxon Lutheran Immigration of 1838-39. This consisted of Lutherans with dreams of practicing their faith how they wished in America. However, in these days this was a very expensive and dangerous venture to travel so far. Many members had to raise “Immigration Funds” by borrowing from wealthy members in the community with promises to pay the money back once they settled in America. What began as a plan to charter 1 ship for a small group had exploded into 700 Lutherans wishing to make the voyage which required the chartering of 5 sailing ships. Many family members and friends had to say good-bye to loved ones, most likely for the last time, before their long trek for America in the late Fall of 1838. By January of 1839, four of the five ships had arrived on the shores of New Orleans in America, as word spread that the 5th ship was lost at sea off the coast of France with no survivors.

With their sights set on St. Louis and their final destination of Perry County, Missouri, the remaining travelers boarded 4 steamboats and embarked north, up the Mississippi River. Their accommodations for their journey was anything but comfortable since they were traveling as mere ‘deck passengers.’ This meant that they were confined to the outside deck of the boats for eating and sleeping, which made their winter ride very cold. At this time there were no locks or dams on the Mississippi River, which meant that ice floating from the river up north was free to sail all the way down to the south, adding to the frigid temperatures on the river. Finally, in late May of 1839 they arrived in St. Louis to join the community of other Germans. Most continued their horse and wagon journey to Perry County Missouri, as about 200 chose to remain in St. Louis. It is this group that became the congregation of Trinity Lutheran Church, with their first pastor Otto Herman Walther, older brother of Carl Ferdinand Wilhelm Walther. 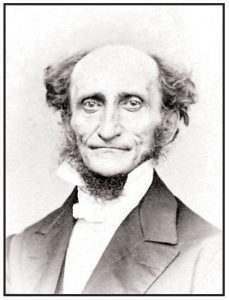 Unfortunately, to the dismay of the new congregation in St. Louis, O. H. Walther only served as pastor of Trinity Lutheran Church for a little more than a year and then died as a result of catching typhoid fever. The congregation then called upon C.F. W. Walther to become their new pastor, however, because of some issues within the Perry County settlement that required his attention, he declined. Despite some early challenges the larger group of Lutherans faced in Perry County, they continued to grow into their new settlements named after towns from their homeland in Germany. Some of these communities consisted of Wittenberg, Frohna, Altenburg, Perryville, Friedenberg, Farrar, Crosstown, Longtown, Uniontown, and Dresden. Once issues within the new community in Perry County were resolved, C.F. W. Walther answered the 2nd call to become pastor at Trinity Lutheran Church in St. Louis with his return.

After much growth within the church Pastor Walther asked his congregation in 1847 for their support in creating a church body with the sole mission of training pastors for the ministry. The congregation accepted his request and founded the “Joint Synod of Missouri, Ohio and Other States”, later known as The Lutheran Church–Missouri Synod. After the synod was formed, Walther moved the seminary, which had earlier resided in Perry County, to St. Louis where it became Concordia Seminary and with he as its first president. Under Pastor Walther’s guidance the synod saw such advancements such as: a “publishing house” (which later became Concordia Publishing House), Der Lutheraner newspaper, and the first Lutheran hymnal. Also with the birth of the new synod in the Church, like-minded Lutheran congregations around the mid-west grew more united.

By the early 1860’s Trinity Lutheran Church had grown to capacity of its first church near the corner of 3rd Street and Lombard near today’s Poplar Street Bridge heading into Illinois. This resulted in an enormous fund raiser to build a new church, and in 1864 deep in the midst of the Civil War, the congregation at Trinity Lutheran Church built their church. Many church members had mortgaged their homes in a strong effort to build the church debt-free at its cost of $117,000. 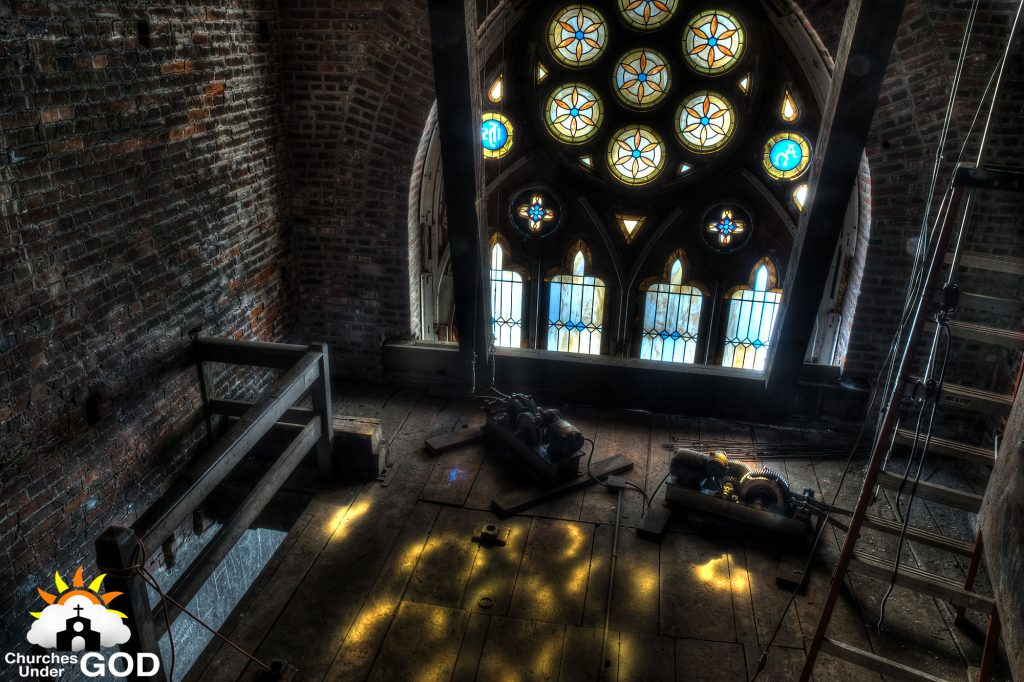 The ringing of the 4 bells in the Bell Tower was no small or simple task in 1866, when the Boys’ Youth Group raised the money for them. Because of the Civil War, all metal was confiscated so the creation and installation of them bells was delayed until 1866 even though they were purchased 2 years earlier. As tour guide Dennis Rathert at Trinity Lutheran Church describes; ringing the bells required 7-8 teen-aged boys, 5 alone just to ring the big bell. To ring the big bell 2 boys would be positioned on a landing above while 3 boys were positioned below. When the bell was set to be rung, the 3 at the bottom would grab the rope and pull with all their might, while the 2 boys up above would leap off the landing and ride the rope up and down as the bell rung. Sometimes the 3 boys at the bottom would feel left out so they would hang on when they were told to let go and then bump their heads on the stairs above. To this day you can still see names, initials, and years from some of the more long term bell ringers. Some of the years still visible are from; 1905, 1909, 1913, and so on. Up until the 1950’s a pair of loud speakers could be heard playing Christmas music out toward the neighborhood.

The year of 1896 was a very tough year for many churches in South St. Louis. On May 27, 1896 a very large tornado ripped through the city destroying a number of churches, completely leveling some of them. Trinity Lutheran Church was also hit very hard in this storm. Some of the damage Trinity experienced was; 35 feet of it steeple was torn off, the altar which housed a painting, instead of the present polychromed carving of the Lord’s Supper was completely swept away, and an angel statue was completely destroyed. What amazingly survived was the baptismal font and the pulpit. The storm had also divided the balcony and destroyed much of the stenciling in the walls and ceiling. However, there was great effort taken during the restoration to retain the original color scheme of the interior of the church. Also, 15 feet was removed from the length of the church in order to attach a parsonage during the storm restoration. It was at this time during the restoration that the church was fitted with electricity. However, the church needed both gas and electric because the electric company would shut the power down at 9pm every night. This would of course effect evening services, in which case gas was used to light the church.

Trinity’s Saxon chalice is one of two that traveled across the Atlantic with those from Germany. As the story goes the two chalices were made in Vienna, Austria, between the years of 1650-1690 for a Spanish monastery. During the Napoleonic War they were lost as plunder when Spain was invaded. Somehow they had found their way into the hands of a Saxon royal family, and then were given to the group bound for America by a member of their religious community.

The smaller chalice arrived in Altenburg, Missouri during the original voyage, while the larger one was kept in St. Louis. Up until 55-60 years ago the smaller one was used during services, but has since been retired due its deterioration. The larger one, at Trinity Lutheran Church, is silver and gold with 6 medallions on it, 3 at the top and 3 at the bottom. The top 3 depict Christ’s birth, while the bottom 3 depict his death. The most priceless portion of the chalice is its truly amazing hand-painted ivory that is so detailed you can see the threads in Gabriel’s wings. The medallions are also surrounded by white sapphires. Since this piece is truly one-of-a-kind, it is considered truly priceless. Where the smaller chalice from Altenburg has since been retired, the larger one at Trinity is still used during every service with Holy Communion.

Over 170 years later Trinity Lutheran Church in St. Louis’ Soulard neighborhood is still an important part of the community in South St. Louis with its programs and efforts created to assist the homeless, poor, and low-income families. They also partner with other city churches to enhance their efforts in reaching out to those in the community that need physical assistance as well as moral and religious guidance.

One such organization that Trinity Lutheran Church participates with is Caring Ministries, Inc. CMI was started by the partnership of two Lutheran congregations working together in Spring of 2011, to help find stable residency in St. Louis for the influx of immigrants choosing to make St. Louis their home. With the help of a California real estate investor, this organization works to rehab homes for new Americans and help put them on the road to achieving self-sufficiency and sustainable housing. Other programs assisted by Trinity include Christian Friends of New Americans for new immigrants, and the Community Re-Entry Program for Ex-Offenders.

Many of the article’s sources are linked throughout the text, the following are sources outside of the internet.

Steamboats arrive in St. Louis, all but 200 leave for Perry Co. Missouri
1839 - 1st Lutheran church founded west of the Mississippi